Today I want to write about an informative YouTube video that I just watched regarding a DIY livestock scale kit. The man who is in the video purchased this kit (from someone else, unfortunately).  However, he did a great job documenting the process of his, do it yourself scale kit that he purchased online.

The frame that he had fabricated for his livestock scale was really well done.  It had a solid structure around the perimeter and multiple braces going across the platform as well. This is an important point. A solid structure for weighing is much better than a sagging and rickety wooden platform.  He also had the (4) mounting brackets welded to the frame ahead of time which was smart.

Three Ideas Regarding the DIY Livestock Scale so far …..

First, he probably could have added some type of channel or protection for his four load cell cables on the underside.  He doesn’t really cover that in the DIY livestock scale video but the more you can protect those cables, the better.  Second point, he could have mounted the load cells the opposite way if he wanted to. That way they aren’t sticking out so much on each of the corners and are more of an internal part of the platform. I’ve even seen load cells mounted in each corner diagonally. By the way, how does a load cell inside a scale work? My third point pertains to the junction box. I think he mounted it underneath the wood which can make accessing it impossible without flipping the scale upside down.

If you have the ability to do so, I would recommend building a cavity or some type of area within the frame to set that j-box in. Then you would need to cut out a small rectangle in your wood platform so you could access the j-box from the top of the scale. That would make fine tuning the load cells and any future troubleshooting a little easier. Otherwise, I thought the scale he built was really good.

Once he finished the scale and moved it outdoors you can see how great it looks.  I don’t know if he’s planning on keeping it outdoors but a few points to consider.  Cables are one of the most vulnerable parts of a scale system. You can see his scale homerun cable is all over the place and that needs to be secured and protected as much as possible.  My other concern with this system is the digital weight indicator. The one that came with his DIY scale kit is about the cheapest scale indicator available. I would prefer to see a better scale digital weight indicator being used for this application. 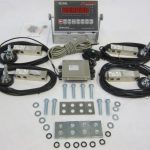 Of course, this DIY livestock scale kit is going to be non legal for trade.  But for basic weighing, this person has a nice scale system for weighing steer and I’m sure that now that he’s done this project, he has a much better understanding of the “feet” on each corner and all the other components.  I hope you enjoyed the DIY Livestock Scale video, I thought it turned out really nice. I’m glad he documented his project.